I won an award. Thank you. 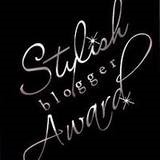 The first, shown above was given to me by Megan Conway. Thank you, Megan.To accept this award, I am required to do a couple things:
Since the facts about me need to be random, I'm going to do just that. Voila, seven random facts about me:
Now for my winners of the Stylish Blogger Award:
You'll find that all of my winners have insightful content and very different designs. Great style.

Posted by Jamie McHenry at 4:21 PM

Email ThisBlogThis!Share to TwitterShare to FacebookShare to Pinterest
Labels: Awards, Me

Say hello or add to the discussion.